Our top priority at Peak Performance Swim Camp is to implement our philosophy to the fullest. We employ a one-of-a-kind holistic training approach that conditions swimmers both inside and out. We believe swimmers are only as good as the sum of their parts, so maximizing their mental, technical, and physical conditioning is paramount.

From a mental standpoint, swimmers’ thoughts both in and out of the pool, continually guide them toward or away from their desired goal. Positive, focused, and determined minds brimming with confidence will no doubt lead to victory, while minds found lacking lead only to defeat.

From a physical standpoint, swimmers’ fitness levels predispose them to success or failure. Those who are strong, flexible, and possess the ideal mix of aerobic and anaerobic fitness extend their lead throughout the race, while those who lack these essential fitness ingredients limp to the finish.

To amplify our holistic training approach, we enthusiastically employ a positive coaching style that includes:

The term “peak performance” is defined as a state in which a person performs to their maximum ability. Swimmers who achieve peak performance in competition exhibit a high level of confidence, technical accuracy, and effortless execution. When asked why he decided to name his swim camp Peak Performance, Founder and Head Coach Nick Baker responded by saying: “It was the best way to convey the camps’ purpose. I wanted the swimming community to know that helping swimmers perform at peak levels was our top priority.”

The origin of this approach comes from a book entitled, The Swimming Triangle, written by our Founder and Head Coach Nick Baker. Coach Baker believes maximizing swimming potential requires a three-sided approach focused on mental, technical, and physical conditioning. To validate this approach, all one needs to do is list the inherent qualities of any great Olympic swimmer. No doubt the list would include a winning mindset, flawless technique, and supreme fitness.

Our holistic training approach is not the only thing that sets Peak Performance Swim Camp apart. In Coach Baker’s words, “I have a sacred obligation to bring out the very best in every swimmer. I see them as diamonds and my role is to make them shine.” And this viewpoint is shared by our entire coaching staff.

Coach Baker’s holistic approach began in 1972, his first year as a professional coach. He found it odd that most, if not all, of the swim teams in his area focused exclusively on physical conditioning. Marathon practices filled with “garbage yardage sets” were commonplace, with little time left for mental or technical needs. Rather than accept the status quo, he added mental and technical conditioning to the mix to create a balanced approach. Now, 48 years later, Coach Baker’s vision has evolved into Peak Performance Swim Camp, a world leader in holistic training and swim camps.

In 2007, Peak Performance Swim Camp formed a partnership with NIKE-US Sports Camps. Partnering with this highly respected and globally-recognized brand has continued to allow us to create a unique synergy that provides direct benefits to our PEAK swimmers around the world.

In 2019, Peak Performance Swim Camp hosted more than 40 swim camps and clinics worldwide – including 20 U.S. locations and 4 international camps in Barbados, Bermuda, Saint Lucia, and Saudi Arabia. Over 1,500 swimmers from 45 countries attended. Coach Baker believes that hosting a multitude of camps and clinics keeps his coaching staff energized and current. He also believes that the large contingent of international swimmers in attendance creates a unique training and learning experience for all.

We understand the significance of your child’s success in swimming, and your important role to help them reach their goals. Thus, choosing the right swim camp becomes essential. With so many programs to choose from, how can you be sure that you’re making the right decision?

Above all, I recommend that you consider a camp’s “care quotient” or the amount of care given to every swimmer in attendance. While improving swimming performance is our number one goal at PEAK, providing a positive and nurturing environment is also a top priority! From the first minute of practice to the end, our expert coaches have two primary objectives: (1) to ensure that every swimmer in the lane feels valued, and (2) to provide quality coaching to all regardless of age or ability. At most camps, we maintain an eight swimmer to one coach ratio. We also provide “personal time” within each practice, so that swimmers have the opportunity to receive individual feedback from the coach. As one might expect, it’s personal feedback and not group feedback that makes the biggest difference in swimming performance. Moreover, we offer a daily wrap-up session to ensure that every swimmer feels included and makes tangible progress throughout the day. If adjustments are in order, we’ll make them on the spot!

While we value our swimmers, we appreciate you, the parent, and understand the critical role that you play. At PEAK, we have an open-door policy and welcome you to observe each and every practice. While we’re incredibly proud of what we do, we recognize that there’s always room for improvement, and your constructive feedback is encouraged. After all, your child’s overall experience and success means EVERYTHING to us! 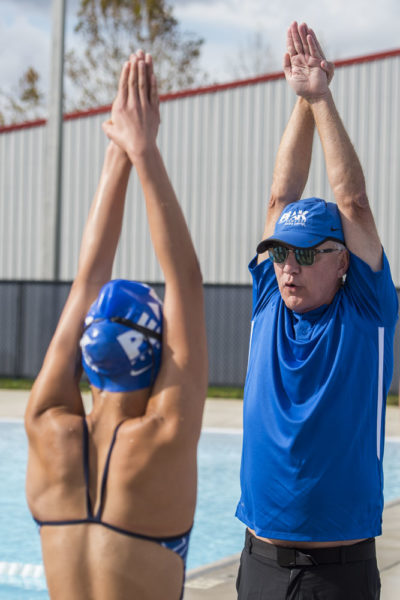 The camp’s one-of-a-kind holistic training approach and positive coaching style is the creation of Olympic Coach Nick Baker, Founder and Head Coach of Peak Performance Swim Camp. Following is a brief list of his swimming and coaching achievements: